Pressure overload stretches the myocardium leading to functional and eventually structural adaptations if the mechanical stress persists. Repetitive ventricular stretch can result in physiological remodeling of the heart as is observed in response to exercise training. However, when this stress is chronic, it leads to unfavorable cardiac remodeling that is associated with dysfunction. To date, the main effective treatment to limit myocardial remodeling is by reducing the pressure overload. Hence, there is a dire need for better understanding of the signaling pathways that underlie the cardiac load-dependent (mal)adaptations to provide pathways for the development of novel therapeutics.

In response to stretch, the myocardium produces increased amounts of nitric oxide (NO). Until recently, NO signaling was considered to mainly involve activation of the cyclic guanosine monophosphate (cGMP) dependent protein kinase (cGMP-PKG) pathways. However, NO can also directly attach covalently to cysteine thiol residues, a process called S-nitrosylation (SNO). This second mechanism has been less investigated and is the focus of the present project. SNO is a major reversible post-translational modification involved in the regulation of protein activity; it is also proposed to protect proteins from irreversible oxidation of thiol moieties. This process has been well described in mitochondria where it is associated with reduced ROS production. Cardiac myofilaments are also redox sensitive and, thus, potentially impacted by NO signaling. Whether SNO is involved in the regulation of cardiac contractile machinery remains to be deciphered.

The NitrosoCard proposal aims to test the hypothesis that in response to stretch, eNOS translocates to the myofilaments to activate a SNO signaling pathway that regulates contractile properties. This pathway is lost under chronic stretch, resulting in a maladaptive response of the heart and the subsequent development of cardiac pathology.

Accordingly, our overall objectives are to elucidate the modulatory role of myofilament SNO induced by stretch, and to contrast the adaptive versus maladaptive cardiac adaptations. Our hypothesis will be tested through three original work packages ranging from the whole animal to the molecular scale. 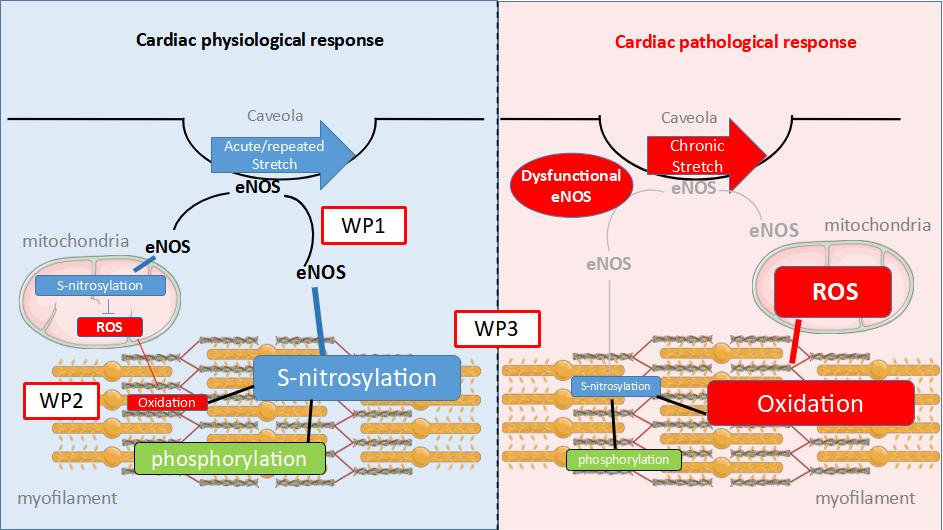